Two major themes, transparency and precision medicine, emerged from the 2015 AHIP (America’s Health Insurance Plans) Institute conference we attended in Nashville in early June. As evidenced by an ongoing list of new initiatives such as the Clear Choices Campaign, a coalition of prominent employers and insurers promoting transparency, and the Pharmaceutical Cost Transparency Act of 2015, a proposal in California that would require drug makers to report profits and production expenses for any drug or course of treatment costing $10,000 or more, transparency efforts continue to show strong momentum.

This momentum is likely to increase with a rise in healthcare costs. After historically slower growth rates in recent years, healthcare spending is now accelerating at higher-than-expected rates. U.S. healthcare spending increased by 7.2% in Q1 2015 compared with the same period last year, driven in large part by higher spending among hospitals (up 9.2%), according to data from the Census Bureau’s Quarterly Services Survey. This backdrop is a positive for Castlight Health, which is focused on self-insured employers, and HealthSparq, the leading vendor focused on health plans. As a further sign of progress, in late May, Castlight filed an 8-K disclosing a process by which it can obtain a customer’s plan information from UnitedHealth to allow Castlight to provide its services to that customer. During a panel discussion at the conference, AmeriHealth also indicated its desire to be transparent and provide third parties access to AmeriHealth’s data, but it is moving cautiously given concerns about how this information will be used.

Our conversations with some of the leading population health vendors suggest sales activity has significantly accelerated since the start of 2015, and we expect the winning vendors in the broader market will be the independents offering a technology-driven solution (ZeOmega, Wellcentive, and Kryptiq) or outsourced-driven solutions (Evolent Health, Valence Health, and xG Health), not the EHR vendors (Allscripts, Quality Systems, and athenahealth) who are aggressively entering the market. Furthermore, the payers (vs. the providers) appear to be moving faster and have experience managing risk as well as the financial wherewithal to subsidize the cost of these initiatives. 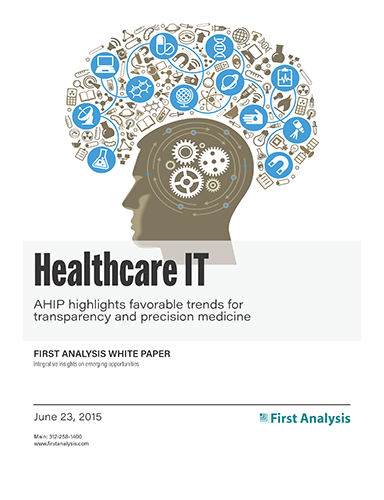